Spring not only brings fresh green and the first blossoms of the year but also many enticing themes from the world of felting and textile art in the filzfun.
The cover motif of the English duo Rosiepink gets you attuned to the end of winter. Spring enters your house in the form of a self-felted table runner with flowers peeping through the snow – we have the exclusive instructions by the two renowned felt artists for you!
Yasmin Groß confesses that she is crazy about wool. The young artist makes, amongst other objects, the so-called Veggie Furs, i.e. comfy furs to sit on, for which no sheep has to die. In the filzfun you learn more about her artwork and she explains step-by-step how wool locks are sorted out for dyeing and gently washed.
The American felt artist Terese Cato is well known for her ironic, portrait-like characteristic heads. By means of photographs showing her work procedures she lets us in on her secret how these most expressive facial expressions of her figures come into being.
The Hungarian felt artist István Vidák has been trailing felt in particular and in general among different cultures for a long time. With his contribution about the Boktscha, the Turkmens’ felt bag we start his series about traditional felting. Apart from that his research of the history of the »infinite« belt called Dora has led him to the Himalayas – we report. Further, you may look forward to many interesting contributions from 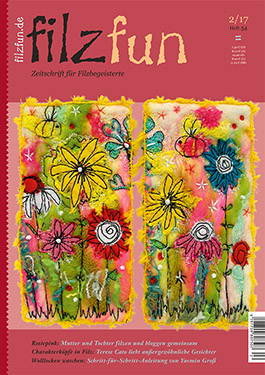 and by the international felting and textile art scene: from Sweden from the felt symposion Kratov on the island of Gotland, from the felt::feutre canada in Canada, from Austria, where Lisa Klakulak held one of her Strongfelt courses for the first time and from Hungary, where Judít Pócs‘ had a highly regarded work show in Kecskemét. And yes, we are even ready to leave the Earth altogether: We accompany a team of pupils from Düsseldorf under the guidance of Inga Dünkelberg-Niemann on a courageous and very rewarding scientific survey on planet Felt.
Last but not least please find in our supplement more than 160 dates for felt enthusiasts on four pages – from workshop to felt journeys.