Felt can be as filigrane as a cobweb yet sturdy enough for daily use – a feature of the material that not only fascinates the artist Kira Outembetova. The Muscovite has found a unique style of her own, amongst other things she is inspired by paintings by the old masters. Ricarda Aßman warmly introduces this exciting artist in the filzfun summer issue.
Fiona Duthie and Yekaterina Mokeyeva have achieved a great reputation in the international felters’ scene. With their exhibition »Sea States« which was on show in Prato, Italy they have set yet another highlight. Both artists independently have used their individual knowledge of the sea, wind and waves to create astounding objects. See for yourself!
At the German-speaking feltmakers‘ meeting in Hohebuch dozens of so-called »four-hands« art objects were made: Felt creations in combination with embroideries made by Afghan women – an interesting experiment. We report on this meeting and the pre-courses as well as on the regional meeting of Northern German feltmakers, further on the Swedish Sheep Festival held in Kil and the Wollefest in Leipzig.
The Dutch felt artist Annemie Koenen has held courses in Heike Giesbert‘s KreAKTIVWERKstatt in Essen for the very first time. In this issue we present the stunning three-dimensional objects made by the participants.
The three artists we portray have their first name and a passion for textile art in common. There the similarities end – they all live in different countries and have 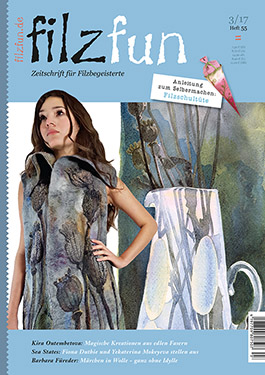 individual working techniques: The Franconian makes extraordinary headgear, jackets and coats, but also felt sculptures. Barbara Füreder from Wien conveys the contents of fairy tales into expressive felted images which have nothing to do with romantic idyllic scenes à la Ludwig Richter. Barbara Shaw from Great Britain makes impressive depictions from tiny pieces of fabric, wool locks and fibres. She especially likes to portray the fuzzy Cotswold sheep.
Last but not least we have something really special for you: For all small girls who will have their first day at school in the coming months, »Filzfrieda« Katrin Schulz has designed a so-called »school cornet« in a Sleeping Beauty style. By means of detailed step-for-step instructions with many pictures you can make one for your first-grader, too.