It is hard to believe: Until forty years ago the archaic handicraft feltmaking was all but forgotten in Western and Middle Europe. The Hungarian textile artist couple Mari Nagy and István Vidák played an important role that this ancient craft is now blossoming anew, also due to their meticulous research into felting traditions and the organizing of many feltmaking camps. These four decades of feltmaking renaissance were celebrated at the occasion of a big felt art exhibit in Budapest. The filzfun honors this jubilee with a carpet made by István Vidák on the cover and a full report with many photos.
That textile art and especially felting have found their place among important cultural assets is amply proven by a whole series of exhibits we report on in the filzfun fall issue: the show by the Filzkollektiv on the island Rügen, by TAFch, by Filzszene Schweiz (felting scene Switzerland), by the feltmakers from Flanders, by Beatriz Schaaf-Giesser and Esther Weber in Gladbeck as well as by Angelika Hofmeister and Barbara Füreder in the Wachau area, Austria.
Also, the range of offers for felting workshops has reached an astounding high quality level in the course of the past decades. A great example is the workshop titled »Charakterköpfe« (approx. heads with a lot of character) by Silke Sordyl in the studio of Carmen Wagner, the shoemaking course held by Sabine Reichert-Kassube at Elvira Altdorf’s and the mask course taught by Gladys Paulus at the Oberrot felting school.
Susanne Schächter-Heil campaigns as chair of the German Filz-Netzwerk (Felt Network) and is a tireless instructor in felting matters. She has written a book about feltmaking basics which has just been published at the Leopold Stocker Verlag (Publishing House). We 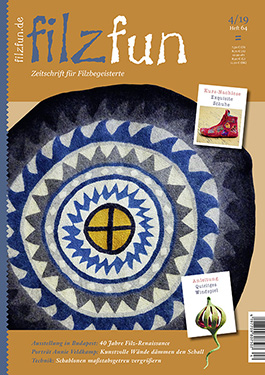 introduce the author together with an excerpt from her book.
Meanwhile it is well-known that felt can serve as a sound-insulating material. How beautiful sound-insulating panels can be is demonstrated by the Dutch feltmaker Annie Veldkamp. Bahar Bozaci from Turkey has perfected the ecoprinting technique not only on fabrics or felt but also on leather and pottery.
As usual, the practical side of feltmaking doesn’t miss out. Margit Röhm tells us how patterns or stencils can be enlarged on scale according to the shrinking factor of the wool and Beate Bossert gives a step-by-step instruction for felting colorful wind chimes that whirl and dance in the autumn wind.