Show is fantastic for fibre and felt


Visitors to the wool and natural fibres extravaganza Wonderwool Wales 2013 will be guaranteed a show that’s bursting at the seams with creativity and inspiration.
Fibre enthusiasts can shop ‘til they drop at a lively show where around 175 exhibitors will offer a wide and vibrant selection of yarns, fibres, equipment, books and designer-made products covering all the fibre crafts such as knitting, crochet, spinning, weaving and felting.
The event will be held over the weekend of April 27 and 28 at the Royal Welsh Showground, Builth Wells. Held annually for the past seven years, it is now a firm favourite for anyone who is enthusiastic about natural fibres, crafts and environmentally-friendly fashion and furnishings. Originally set up to showcase Welsh wool, the festival has more than quadrupled in size since it was first held and has broadened to include a whole range of other natural fibre items, including alpaca, mohair, angora, hemp, flax and silk.
Show highlights include the ever-popular Woolschool workshops, many often booked to capacity before the show, which offer the chance to learn a range of skills. The 2013 programme includes Sirpa Mantyla from Finland showing how to make felted mittens and wrist warmers.
The show also provides plenty more opportunities to get tips from the experts, with the Guilds of Weavers, Spinners and Dyers giving demonstrations in their combined display area and many other stands putting on their own events and activities. Throughout the weekend there will be a series of felt making demonstrations by members of the International Feltmakers Association and on other stands, visitors will be able to watch spinning, knitting, crochet techniques, weaving and dyeing demonstrations. The show’s interactive area also gives visitors the chance to try their hand at a range of techniques, get advice 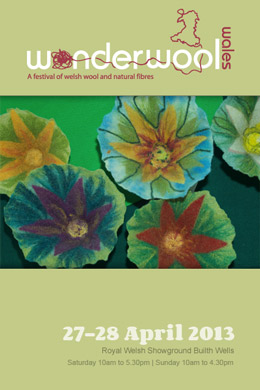 on a particular subject, watch demonstrations or just catch up with friends and knit and natter. As usual, the entertaining Sheepwalk, a woolly take on the catwalk, will showcase garments and accessories made by exhibitors in a way which never fails to amuse as well as inspire. The show will also include exhibits of rare breed sheep and alpacas, including an exhibit by the British Coloured Sheep Breeders’ Association.
Wonderwool Wales is run by a small group of producers who have succeeded in growing the show and its reputation year on year until it can now claim to be Wales' premier annual festival of wool and natural fibres. Since 2011, it has also been an official supporter of The Campaign for Wool.
www.wonderwoolwales.co.uk