In the filzfun winter issue we portray the Cyprus-bound artist Natalya Brashovetska, originally from the Ukraine. Her new collection „Victory&Victory“, where she combines different materials and techniques, is dedicated to the brave Ukrainian women. In a short basic instruction she explains how metallic fibers make for fine highlights in felts. Also the artist Ilona Riehle, who spe-cializes in 3-D objects would like to nudge you with her detailed tutorial to make your own ambi-tious 3-D honeycomb vase.
Meet another wealth of inspirational material in our portrait of Elvira Altdorf, who reports on re-verse clothing, upcycling projects and powerfelting workshops. Last but not least we are glad to present a third tutorial for an atmospheric, lovely hand lantern for the Advent and Christmas season.

From felt in textile art to felt costumes at a horse show to a felt shoe for the injured hoof of a donkey, the spectrum of topics in the fall issue of filzfun ranges. We present a portrait of three felt artists and craftswomen: Bella McBride from Canada and Hendrijke Kühnapfel from the Allgäu region have brought it to perfection in handling the felting needle and create impressive animal sculptures - each in her very own handwriting. Austrian Claudia Wirtitsch specializes in street shoes made of felt and leather.
Several creative women have taken up the felting network's exciting challenge of felting green projects without using green wool. We report on their experiences and show the results of their experiments.

A cat or an octopus as headgear? American Rae Swon creates such extravagant creations with a felting needle. She is one of the felt artists we are presenting in the summer issue of filzfun – each with her very own signature. While Rae Swon specializes in naturalistic needle-felt sculptures, Chantal Cardinal processes raw wool into impressive works of art, and Petra C. Sommer designs and makes enchanting clothing using nunofelting techniques.
As a special extra for filzfun readers, all three artists have prepared step-by-step instructions for a felting project: a wet-felted rose as a brooch, an oversized moth in needle-felting technique as a pendant and a colorful rooster as a doorstop and decorative element for the entrance to the house.

This issue of filzfun aims to provide you not only with interesting and entertaining reading material, but also with ideas for your own activities. To this end, we introduce you to Mandy Nash from Wales, who wrote a book about felting bags during the Corona restrictions. Perhaps you'll feel like making the unusual fringed scarf that Mandy Nash describes in detailed instructions, or be inspired by the action of two northern Italian felters who populated an enchanted forest with more than a hundred hand-felted figures that children were then allowed to find and take home. Also in the portrait: Margit Röhm, who has been chairwoman of the German felting network for several months. She would like to have more time to realize all her plans for her own felt art, but also for the network of professional and hobby felters.


Apart from that we show the results of the felting challenge »Filz und Draußen« (Felting Outdoors) and report on the digital Textile Art Berlin with two online exhibits from Yvonne Zoberbier and Sawatou Mouratidou.
Seite:
1
2
3
4
5
6
7
8
9
10
11
12
13
14
15
[pinit count="horizontal"] 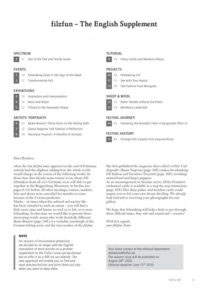 In our online shop you can order any available single issue of the FUN and all of our gallery books. So you can easily order the issues which you are missing! We guarantee a fast delivery and secure data transmission.
You can choose at the end of your order to pay by Direct Debit or by PayPal (Creditcards).